Ken Morritt began manufacturing fly reels and fixed spool spinning reels at the St. Albans Works on St. Albans Road  in Cheam in Surrey shortly after World War Two. Although not highly regarded by collectors, Morritt's "Intrepid" reels were often the first reels used by many of today's anglers, and a great number are still in everyday use. Some of these reels sported significant innovations, not least of which was their method of production. Rather than being machined, Morritt's reels were die-cast, using much the same methods as those for the manufacture toy cars. It may be for this reason, and this reason alone, that their contribution to the development of the hobby remains largely ignored.

Morritt's Fly Reels at a Glance:
Taking each reel in turn, roughly chronologically:
This is a very simple reel, with a grey "Hammerite" finish. Both the spool and cage are die-cast,  with the spring and check-pawl secured on integrally cast posts, using locking washers. The check pawl itself is made of a polythene-type plastic and is consequently self-lubricating. This is a fixed check, right-hand wind reel, and, although it looks dated, is actually of a very elegant design requiring relatively few operations in manufacture. You can see from the internal view that the spool is held in place by a simple bolt, engaging with a hex nut that neatly fits into a shaped recess on the back plate. The same casting was also marketed, with a second handle, as a Match reel for use by coarse anglers, a very economical solution to the austerity of the immediate post war era.
The first model of what some regard as an iconic reel, the "Rimfly" has so many advanced features. Notice the easily operated latch, and the spool-play adjustment screw. This reel could also be altered for left or right hand operation, simply by loosening the mounting screws, moving the spring  across to the other side, and securing it. The pawl remains on the same post. If you have read the page on Young's pre-war reels, you might also notice another feature, the one that gives the reel its name. There is a smooth, exposed rim on the spool, that folds over the cage, allowing the reel to be braked using the palm. Remember  Young's Pattern 2? Another innovation is much harder to see. The reel is coated in a very hard epoxy-based finish, extremely resistant to wear and chipping. All Intrepid reels were supplied at this time in an innovative polythene "clam-shell" case, clearly marked with the model of reel contained within.
The "Super" fly reel was contemporary with the 3½" fly reel at the top of the page, - I personally suspect the Rimfly might have been introduced after the Super. Like the Rimfly, this reel has a number of striking innovations. It shares the exposed rim and hard epoxy finish of the Rimfly, but where it scores seriously is the introduction of what might be the first disc-drag that uses a one -way clutch bearing. 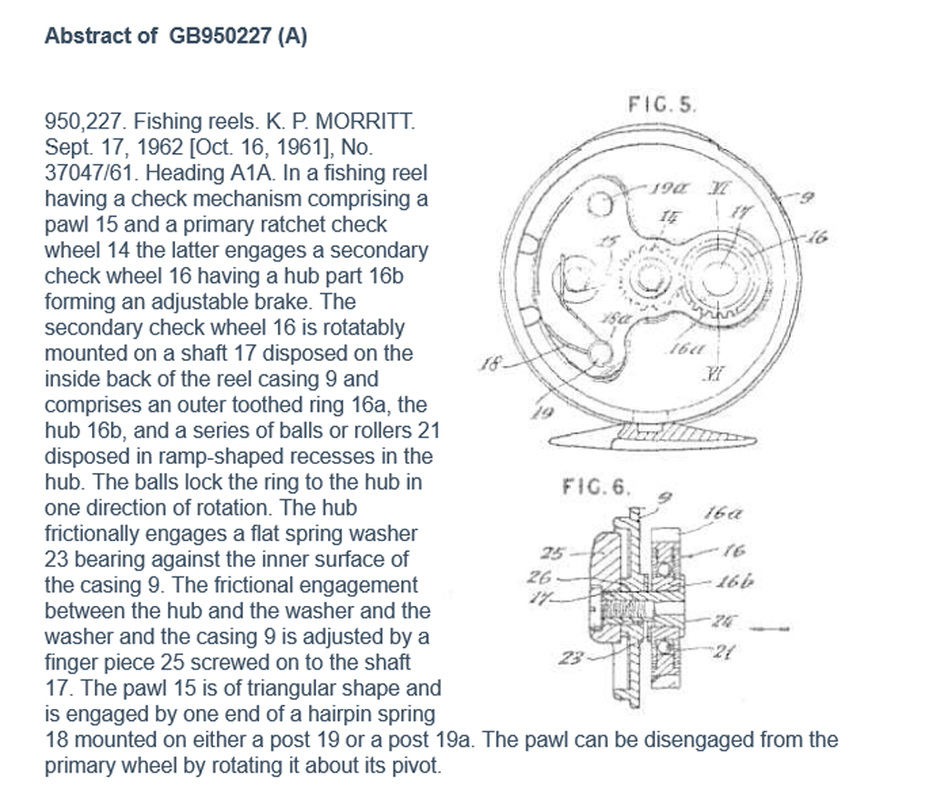 This is the abstract of Ken Morritt's original patent application for the drag on the "Super" Fly, filed in 1961. The key phrase is "The balls lock the ring to the hub in one direction of rotation". This means that when the drag is applied, it only affects the rotation of the reel as line is paid out NOT when line is retrieved, making this the first one directional drag reel to use a mechanism now common to almost all modern reels.

The other nice thing about this reel is that it came complete and boxed, along with all the reel papers originally issued:
Morritt's were perfectly capable of high quality machining. As you can see from the reel papers, they also manufactured fixed spool reels. In fact the range of fixed spool and later, multiplying sea fishing reels, formed a much greater part of the output than fly reels.
The second version of the Rimfly differs only slightly from the first. The major difference is that there is now a complete second set of checkworks, making it possible to convert the direction of wind simply by flicking the two check pawl positions. This is the reason for a new cage casting, to accomodate the extra components. The other difference is harder to spot. The reel no longer sports the tough, epoxy-based coating of the first version, being merely painted in a simple dark grey metallic paint. Reels were still supplied with the clamshell case

It was around this time, 1968, when the second version of the Rimfly was on the market, that the firm relocated to Falmouth on the south coast of England. It also seems that the company was acquired by Gladdings, and reels were sold as "Gladding  Intrepid" in a characteristic white shipping box, with yellow and blue stripes. See "Later Years"
The Gearfly was a later addition to the Intrpid range, possibly as a response to the popularity of Young's Speedex.  Both reels had a similar mechanism, with a separate handle engaging a drive gear on the backplate that in turn acted on a reciprocal gear that drove the sprocket. A simple pawl check was applied to the drive gear. Notice the tension adjust on the check pawl spring. The Gearfly was the only Intrepid reel to have this feature.These reels were available in (I think) two sizes, Regular and King size, and at one point were marketed as the "Aristocrat" series within the general Intrepid offering.

One of the puzzles about Morritt's early years is exactly where the company was located. As there appear to be no actual catalogues of the reels, the only choice is to try and piece something together from leaflets, adverts and what people can remember. Variously I have seen references to Gander Green Lane in Sutton, The St. Albans Works, St Albans Road, Sutton and perhaps the most promising, Intrepid Works, Sunningdale Road, Cheam. This road runs parallel to Gander Green Road, and has a number of elderly industrial buildings mixed in amongst pre-war housing. Was this then the site of the Intrepid Works immediately before the move to Falmouth?
later years
All text and images © A. Crisp 2014 - 2021 unless otherwise indicated
Proudly powered by Weebly